The Ben and Jerry’s of Hummus – With Jesse Wolfe

The Ben and Jerry’s of Hummus – With Jesse Wolfe 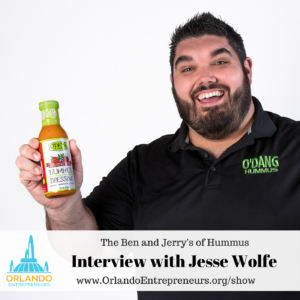 Jesse moved to Orlando from his hometown of Kent, Ohio with ambitions of becoming an overnight success (31 years in the making). He founded O’Dang Hummus in his last year pursuing his BA from the University of Central Florida in Business Management and Entrepreneurship: GO KNIGHTS! He became obsessed with creating BFY (better-for-you) food that was not only healthy but had to taste delicious! Oh and pretty dang cool branding, unlike any other health food, has done before!

His hummus journey included several business plan competitions, tons of chickpeas (seriously), awesome coverage in print and broadcast outlets around the world, including Forbes, Inc. Magazine, Huffington Post, Medium, ProjectNOSH, CNBC and even a swim in the “tank” on ABC’s Shark Tank Season 7. You can find Jesse playing “Chopped” in his home kitchen, getting over his fear of flying while traveling the country spreading hummus, and motivating future entrepreneurs to chase their own dreams!

Check out Jesse’s pitch to the sharks