On today’s show, David and I interview the CEO of IZEA, Ted Murphy.  He shares his entrepreneurial story of how he began designing and selling shirts in his school to now representing some of the biggest influencer marketers and content creators on the planet.  Join our conversation which is packed full of wisdom and advice. 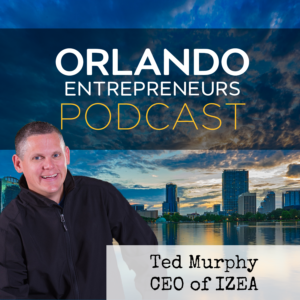 Ted Murphy is a serial entrepreneur who has founded six companies since 1994. Today he is Founder, CEO and Chairman of IZEA. Murphy has been called the father of paid blogging and is largely credited for creating the social sponsorship industry. In 2006 Murphy launched PayPerPost.com, the first online marketplace that paid bloggers to create content on behalf of brands. Ted’s vision for democratizing content and influencer compensation is now a reality in most marketing strategies, from top brands and agencies to small businesses.

Murphy has bootstrapped companies off credit cards, been VC backed and most recently brought IZEA public. His disruptive approach and leadership have enabled him to raise over $50 million in equity for his entrepreneurial endeavors in both public and private markets. Murphy’s backers have included top tier VCs Draper Fischer Jurvetson and Village Ventures as well as billionaires John Poppajohn and Dr. Phillip Frost.

Murphy has consulted for some of the world’s largest marketing organizations including FOX, Bombardier, General Motors, SeaWorld and Disney. He has also negotiated deals with celebrities such as Kim Kardashian, Diddy and Mario Lopez. Murphy is a prominent TV commentator on tech and social media marketing trends and platforms. His unique point of view from the intersection of media and technology, has led to frequent appearances on Fox Business’s Varney & Co, CNBC and Bloomberg TV.