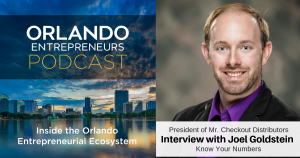 Joel Goldstein developed his experiences in business as a young entrepreneur. He was able to develop and successfully exit his first startup before he graduated from high school. With entrepreneurship in his blood, he became a marketing consultant to some of the world’s most visited websites making a name for himself as the Google Guru.

He published his first book “A Professional’s Guide to Social Media” at the age of 26. The book quickly became a “best seller” on Amazon within the first month and is now in its third revision.

Joel’s second book “Start from Success” quickly rose to the #1 best selling business book on Amazon within the first week of its release. Through his study of successful entrepreneurs and innovative businesses, while researching for the book, he began to realize that there is a generational leadership gap developing among enterprise-level companies.

As a consultant, Joel met has met with hundreds of business leaders developing strategies to train, retain and develop future leaders. Joel began to research and write his third book, the “Millennial Leadership Manual” in 2013. Joel developed this book to share the trends and insights that pioneering executives have successfully employed when working with the Millennial generation.

With a certificate in management from the Wharton School of Business, Joel has been able to apply managerial principles from the classroom to the boardroom. Not the typical ivy league student, Joel has pursued extraordinary adventures such as deep sea diving, running with the bulls in Spain, and spelunking through ancient caves in Israel.

Joel has had the extraordinary privilege of speaking around the world for associations, corporations and prestigious universities on Millennial leadership. Joel is community focused and is the president or on the board of Orlando Young Professionals, New Leaders Council and Jewish Chamber of Commerce. In 2014, Joel has been asked to participate in the Congressional economic development committee held in Winter Park, FL.

Currently, Joel has purchased his family business Mr. Checkout Distributors and continues as it’s President. He also consults for a national think tank on retail business and sits on the board of 13 retail associations.

We represent products in over 60 major retailers and our distribution network services approximately 35,000 retailers across the United States, Canada and parts of the Caribbean.

Distributors, Wholesalers and Retailers turn to Mr. Checkout to find the best selling products, learn which categories are trending and discover what is the next hot new product.